Hello adventurers! Today we’re taking a peek between the covers of Pathfinder Player Companion: Heroes from the Fringe! This delightful softcover book from Paizo Inc. focuses on a variety of non-human cultures and societies. The races explored in this book are dwarves, elves, gnomes, half-elves, half-orcs, and halflings — each of which has multiple heritages and cultures examined. There are also a few paragraphs on Tian ratfolk and the merfolk and sahuagin of Outsea. 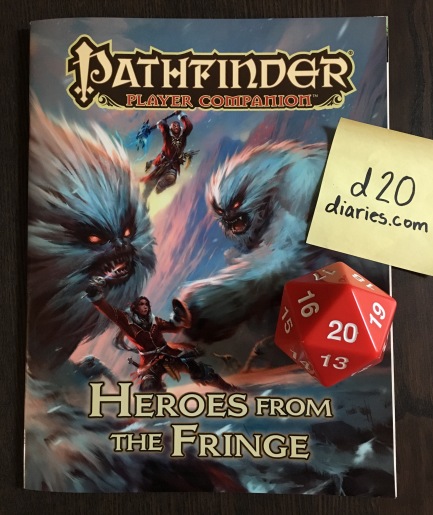 is a soft cover book that is 32 pages in length. As a book in the Player Companion line, it’s aimed at players, which means that you won’t find a ton of world lore or secrets inside. Instead you’ll find character options — things like archetypes, feats, traits, spells, and more. The cover features dynamic art by Setiawan Fajareka which depicts the Iconic swashbuckler Jirelle and the Iconic bloodrager Crowe battling a pack of yetis in a snowy mountain pass. Why does a book about non-human races show a picture of a human on the cover? I don’t know! Technically there are a few traits in this book which could be taken by humans from specific regions, but none of them are meant for Shoanti characters. Whatever the reasoning, the art looks cool so I’m not complaining.

The front inside cover features artwork of a single mundane cultural item from each race along with a short paragraph of flavourful information on each object. There’s an Ekujae wand (elf), Sandkin holy symbol of Sarenrae (half-orc), First World gnome mask (gnome), Pahmet axe (dwarf), shoreborn trident (half-elf), and — my personal favourite — the Segada pouch (halfling).

After this is the table of contents, the rules index, and the introduction which contains nine new traits tied to specific regions and cultures. Many of these traits can be taken by a variety of races. I really enjoy ‘mechanical expert’ for characters from Alkenstar and ‘resourceful scavenger’ for characters from Numeria, but it was ‘cliff strider’ for characters from Arcadia that was my favourite. This trait allows you to climb five feet without provoking an attack of opportunity for your movement as a move action, even if you don’t have a climb speed. Awesome! I’m always a fan of characters who can climb, so it’s a trait that’s sure to see some use. Next time I make and Arcadian, anyway. …Okay, so it might take me a while to get around to using that one. Haha.

Moving on from the introduction we come to six pages on dwarves. Six dwarven heritages are explored: desert dwarves, Mwangi dwarves, Ouat Caste dwarves, Pahmet dwarves, Paraheen dwarves, and Sky Citadel dwarves. Each of these heritages also discusses which already printed alternate race traits they’re likely to select, and comes with a single new alternate race trait. I most enjoyed reading about desert dwarves and Mwangi dwarves, but it was the alternate race traits for desert dwarves (‘desert delver’) and Pahmet dwarves (‘death’s end’) that I liked the most.  After the heritages there are new character options intended for dwarves of some of these cultures (although most of these options can also be taken by non-dwarves). There are two archetypes, seven weapons, and nine feats. The ‘psammokinetic’ is a lawful, monk-like sand kineticist common among the Pahmet dwarves. Believing the desert can burn away their imperfections, a ‘psammokinetic’ lives an ascetic life in the desert. Capable of bending sand, earth, and super-hot air to their wills, they also gain access to some ki powers which they can use to empower their kinetic blasts, bolster their AC, and increase the speed. I love this archetype. Of course, I also love dwarves and kineticists, so that’s not too surprising. The ‘symbol striker’ is a bloodrager archetype common among Sky Citadel dwarves. Capable of using rune-based magic they can place spell runes on their weapons, or rune traps on the battlefield. They also have useful and thematic spell-like abilities and treat linguistics as a class skill. The new dwarven weapons are the axe gauntlet (available either heavy or light), giant sticker (a polearm), pellet bow (available either heavy or light), ram hammer (a one-handed weapon), and sphinx hammer (a two-handed weapon). Of the new feats its the ‘cloak of stone’ feat tree and ‘hammer throw’ feat tree that I liked best. 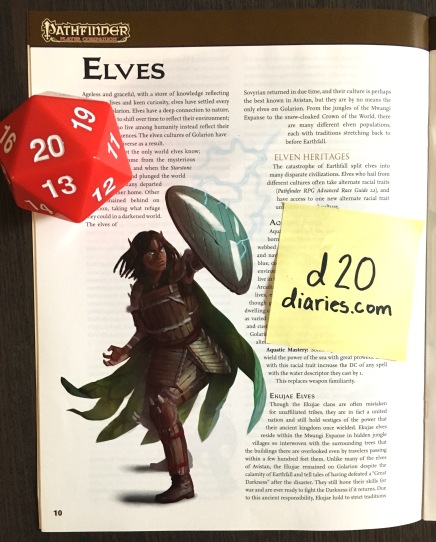 The next six pages are all about elves. There are six heritages discussed, each with it’s own list of applicable alternate race traits and a new alternate race trait. Elven heritages include aquatic, Ekujae, Forlorn, Jininese, Spiresworn, and Snowcaster. I most enjoyed reading about the Jininese and Spiresworn elves. There are three archetypes in this section, but unlike the dwarven ones these are for elves only. The ‘calamity caller’ is a warpriest archetype intended for Ekujae elves that can call down the fury of nature and natural disasters at will but does not gain the focus weapon or sacred weapon abilities (this is my favourite elf archetype). The ‘twilight speaker’ is a skald archetype intended for Snowcaster worshippers of Findeladlara that grants access to some nifty raging songs  (improved devotion, song of understanding, and song of secrecy). The ‘warrior poet’ is a samurai archetype intended for Jininese elves which is a graceful, lightly armoured combatant that dances across the battlefield. All three are very cool! Other elven character options include the ‘Order of the Songbird’ samurai order which values beauty, art, and life; two new sanctuary-themed bardic masterpieces (Findeladlara’s refuge and hymn of sacred lands), and three new magical items crafted by the Spiresworn elves (northern star ioun stone, southern star ioun stone, and farspear).

Up next is four pages on gnomes and although there’s less content, it’s no less exciting. In fact, many of my favourite character options and both of my children’s favourite character options are for gnomes. There are three gnomish heritages discussed in this section with each getting two new alternate race traits instead of one: Bleachlings, First World gnomes, and Segada gnomes. I don’t know much about Segada gnomes (or Segada at all) so it was my favourite gnomish heritage to read about. There’s only one archetype up for offer, but it was my daughter’s absolute favourite. ‘First World Caller’ is a wizard archetype that grants your familiar the fey-creature template and later grants them fairy wings. ‘First World Callers’ can summon fey creatures with summon monster spells, and can warp the world around them. My daughter can’t wait to use this ability to make an area completely without gravity. Haha. She’s really excited and is planning on making her next Pathfinder Society character a gnome wizard (first world caller). Likely in conjunction with the ‘spark of the uncanny’ feat from Pathfinder Player Companion: Wilderness Origins

that gives your familiar the ability to speak. Other gnome options include the ‘whimsy’ emotional focus for phantoms (which is a ton of fun!), ‘bleaching’ psychic discipline, three new spells (pernicious pranksters is my favourite), and one new bardic masterpiece (wildsoul aria). Perhaps one of my favourite parts about the gnome chapter is a delightful piece of artwork that shows a bleachling spiritualist being teased by his whimsical phantom. Look closer and you’ll realize that the phantom isn’t the spirit of a dead gnome, but the spirit of the bleachling’s old self. His joy literally died. I love it! Haha.

Half-elves are up next, followed by half-orcs. Both of these chapters have a lot in common. They’re both four pages long, both feature a vigilante archetype, and they both look at five different heritages. More than that, each of these heritages is one that has already been printed in Pathfinder Player Companion: Bastards of Golarion. Each has a paragraph of information on it and one alternate race trait. After that each has one feat. This feat and the rest of the character options are new additions.

Halflings are next, but they have a very short (and not very exciting) chapter. Two heritages are included, each of which has two alternate race traits. Segadan halflings (with the traits ‘festive’ and ‘small quarter ally’) and Song’o halflings (with the traits ‘danger detection’ and ‘evasive nomad’). After this there’s four new magical items (check out the scatter sling!) and a series of four sling equipment tricks.

The last two pages of the book discuss a few other unique cultures. The ratfolk of Tian Xia are getting some love with a very cool ninja archetype called the ‘gunpowder bombardier’ and two new ninja tricks. And the residents of Outsea — both merfolk and sahuagin — get some new options. Merfolk have the alternate race trait ‘unexpected ally’ while sahuagin have the alternate race traits ‘sahuagin song’ and ‘stoic defender.’ There’s also a new combat style called ‘sahuagin blood frenzy’ which includes three feats.

And that’s it! The end of Pathfinder Player Companion: Heroes from the Fringe! I’m a huge fan of learning about other cultures (real or imaginary), so I really loved getting to see details on and character options for a lot of non-human societies. It’s brief, but fun. Unfortunately, I do have one complaint about the book I’ve yet to mention: cover quality. My copy of Heroes from the Fringe has a cover that’s a tiny bit smaller on one side than the pages inside the book, which means the pages are going to get the heck beat out of them in a short time — particularly when my children flip through it. It’s not a big size difference, but it’s enough of a difference to be irritating. I’m sure if I complained I could send it back for a new copy, but I’m way too easygoing to go to all that effort for a  few millimetres. Haha. Even with the slightly shrunken cover it’s a good book and I’m happy to have it on my shelf.

Thanks for checking out d20diaries! I hope that taking a peek at what’s inside this Player’s Companion helped you decide if this is the right book for you. There’s plenty  of great books out there (and I know I’m not the only one who can’t afford them all!).