Today we’re taking a look at a board game my kids recently got for their birthday: 5-Minute Dungeon! This real-time card game tasks up to five players with working together to escape a dungeon in under five minutes. Each dungeon consists of a randomized deck of cards that features obstacles, monsters, people, and events to overcome. At the end of each dungeon is a powerful boss to defeat. To beat the game you’ll need to triumph over five separate dungeons.

This game is frantic, fast-paced, and more than a little chaotic! Communication and teamwork are essential to your success. Player’s win or lose as a team. 5-Minute Dungeon

is intended for players ages eight and up. Although a single dungeon takes five minutes, playing through a whole game takes about thirty to forty-five minutes, depending how many times you fail to escape a dungeon.

Players take on the role of one of ten characters by selecting a character board. Each board is colour-coded and double-sided, with one male and one female character per board. Every character board makes use of one of five matching decks, and every character has their own unique ability which can be triggered by discarding three cards from your hand. That means that up to five people can play at a time. 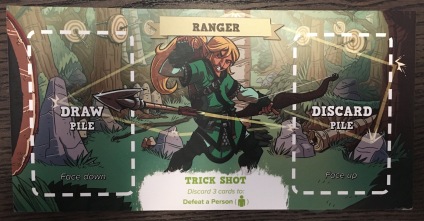 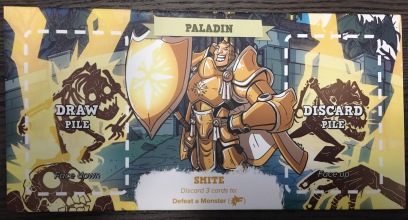 Characters include the blue sorceress and wizard, green huntress and ranger, purple ninja and thief, red barbarian and gladiator, and yellow paladin and valkyrie. Most of the special abilities of these characters fall into two types: those that help get someone in your group extra cards and those that automatically defeat a certain category of card. There’s also the wizard’s unique ability to stop time. We found that it was very helpful to play with the wizard and a character who can help the group draw cards, with the rest of the players taking on abilities that can auto-defeat either monsters, obstacles, or people. Once you’ve got your character picked out you place the matching deck on their board.

Next you set up the dungeon. Start by selecting a boss. There are five to choose from and each is numbered 1 though 5. You simply start at Boss #1: Baby Barbarian and work your way up to Boss #5: Dungeon Master. Each boss also has a number of cards written on it. Baby Barbarian has 20, The Grime Reaper has 25, Zola the Gorgon has 30, and so on. This is the number of dungeon cards you’ll randomly select and place on the boss board. Then you’ll pick out two challenge cards per player and shuffle them into the deck of dungeon cards. This is the boss’s dungeon. You simply place the deck of cards into the space marked with the dotted line and you’re ready to begin.

Player’s begin by drawing a number of cards. This number is variable and determined by how many people are playing the game. Chances are you’ll start with three or four cards. Then you start the five minute timer, flip over the first card in the dungeon deck, and get adventuring!

This game doesn’t come with a physical timer. Instead there’s a timer app you can download on your phone, tablet, and other handheld device. It’s a quick download and easy to use. You simply select a voice for the announcer (I love the ‘fearful’ voice, but my daughter’s a fan of ‘spiteful’) and click start. Sometimes you’ll need to pause the game (such as with the wizard’s ‘time stop’ ability) in which case you simply push pause. If you defeat the dungeon you click ‘We Won,’ if you lose you click ‘We Lost’ and if you run out of time you don’t need to click a thing. It’s an enjoyable, humorous little timer app and my kids really like it. 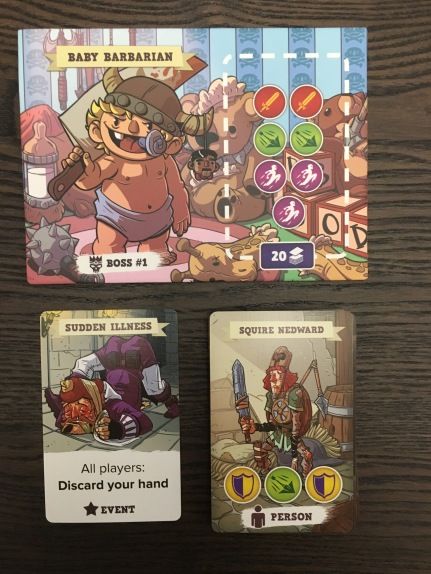 Baby Barbarian and an example of Challenge and Dungeon Cards

There are four major categories of dungeon cards: event, person, monster, and obstacle. Events are the simplest to resolve. They each have a sentence explaining what you need to do, you do it, then you move on to the next card. Examples of events are ‘Sudden Illness’ which forces every player to discard their hand, or ‘Trap Door’ which forces all players to discard three cards. The rest of the cards — monster, obstacle, and person — have circular symbols on them. These symbols match the cards that you must play to defeat them. These cards can be played in any order and by any player. There are no turns. As soon as all the needed cards are played you have defeated the card, it gets moved to the discard pile, and you flip over the next dungeon card. Once all of the dungeon cards are defeated you will see the symbols needed to defeat the Boss.

This makes gameplay fast and chaotic, with players slapping down cards, shouting out what they’re playing, and calling out what’s still needed to defeat the card. It’s the sort of game where everyone feels a sense of urgency and excitement, and get’s a thrill of triumph when a card is defeated.

So what the heck are all these symbols?

There are five major symbols in the game, which are colour coded. These same symbols are seen across all the boss cards and all character decks. Called ‘Resources’ they include the red sword, yellow shield, green arrow, blue scroll, and purple jumping person (which my family always calls ‘sprint’ or ‘dash’ but is probably called ‘leap’). Every deck will have cards of these five types, although they will have them in different combinations. The red barbarian/gladiator deck will have a lot of red swords, for example, while the blue sorceress/wizard deck will have a lot of blue scrolls. In addition to these single symbol cards there’s double symbol cards — cards that have two red swords, two blue scrolls, and so on. These are seen in much lower quantities than the single symbol cards, and not every deck will have them in every kind. While the sorceress/wizard deck may have a few double scroll cards, the huntress/ranger deck won’t. One of the decks — the red barbarian/gladiator has special double symbol cards which consist of a red sword and a second other symbol.

The rest of the cards found in the character decks are black bordered and have a special ability written on them. The most common are abilities that let you auto-defeat a certain category of dungeon card. ‘Fireball’ defeats a monster, ‘Backstab’ defeats a person, and ‘Mighty Leap’ defeats an obstacle. These are super useful cards which can be found throughout all of the different coloured decks in differing quantities. While the sorceress/wizard has a lot of ‘Fireballs’ the ninja/thief has more ‘Mighty Leap’ and ‘Backstab’ cards. Finally, every colour deck has some unique black bordered ability cards. ‘Enrage’ from the red barbarian/gladiator deck lets you choose two players who may draw three cards each. ‘Divine Shield’ from the yellow paladin/valkyrie deck pauses time until someone plays a card and lets every player draw one card. ‘Magic Bomb’ from the blue sorceress/wizard deck counts as one of each type of resource. My personal favourite card? ‘Heal’ which lets you select a player who can put their entire discard pile back on top of their draw pile. Awesome!

As mentioned, every deck is different but equally useful. You’ll soon discover which play style you prefer and find a favourite, so I highly recommend trying each deck out. I love the yellow paladin/valkyrie deck best — particularly when played with the valkyrie character who can help her fellow players draw cards. The yellow deck has a lot of different healing cards, which I find can be incredibly helpful. My son, on the other hand, prefers the to play as the blue wizard. He’s a huge fan of the wizard’s ‘Time Stop’ ability — which is so helpful I’d go as far as to call it a necessity. He also loves the ‘Magic Bomb’ card which can only be found in the blue deck. Finally, my daughter prefers to play as the green huntress — solely because she loves the art. To each their own, I guess. Haha.

With all the decks in their places, cards in hand, and the timer started, play can begin. There’s a few other rules you need to know, but not many. Whenever you have less cards than your opening hand consisted of you can immediately draw cards to fill your hand back up to maximum. Discard piles do not get shuffled back into the draw pile once the draw pile is empty. This means that if your deck ever runs out you can no longer draw cards — unless someone plays a card that gives you cards from your discard pile or something similar.

Winning will take teamwork, speed, and luck. If you win you reshuffle your decks, select your character (you do not need to keep the same character throughout all the dungeons), set your boards back up, and build the dungeon for the next Boss. When everything’s ready you begin play again. If you defeat all five dungeons you win the game.

If you ever fail to defeat a dungeon you’re supposed to reset, going all the way back to the Baby Barbarian and his dungeon again, but my family didn’t like this rule. Instead we just replayed the dungeon we were on.

We’ve played this game quite a few times. Sometimes we finish it all the way through, and sometimes we only play a round or two. My kids and I really like it. They enjoy the teamwork aspect, and that they can always be playing. There’s no waiting for your turn or getting beat on by your friends. It’s fun and fast. It’s not a game for everyone, though. My husband doesn’t really like it. He’s a fan of strategic, complex games. Chances are whatever game we’re playing he’s going to be that player taking the longest turns. Unsurprisingly, the chaotic, real-time gameplay of 5-Minute Dungeon is not to his tastes. It’s also not the kind of game you can play anywhere. Players are going to get loud. Although you could bring to a party, family gathering, or friend’s house, it’s not the sort of thing you’re going to bring to play at the library, local coffee shop, laundromat, or airport. Finally, it’s not the sort of game you want to let the kids play late at night. Mine get antsy, excited, and leap and jump around. Not really a relaxing, winding-down sort of game. 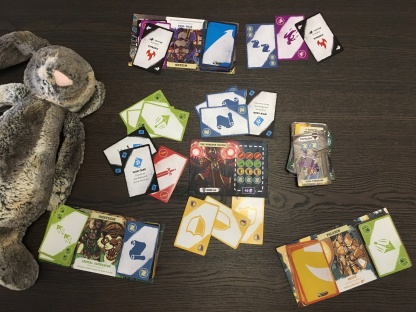 The board after my kids and I defeated the final boss!

All in all, we really liked 5-Minute Dungeon

— especially my son. It’s fast paced, easy to learn, and enjoyable. My only complaints? I wish the boss cards were double sided so you could choose which of the two to face off against and I wish there were more dungeon and challenge cards included in the game so the dungeons felt more varied. But, I suppose wanting more of a game isn’t much of a complaint. More like a wish list. Haha. 5-Minute Dungeon

is a pretty easy game to find that currently retails for around $30 Canadian. Our copy belongs to my eight-year old son, and made an excellent gift. He loves it.