First off, you need a rulebook. Rulebooks contain the rules for the game, and information on what kinds of characters you can create. In most cases it also contains information on how to run a game for other players (how to be the Dungeon Master or the Game Master). Which book is required depends on which game you’re going to play. Later on in d20 Basics we take a look at the many gaming books available, but for now, here’s a short list of what you’ll need:

If buying the book is too big of a commitment for you, most gaming systems have a collection of documents on their website which provide the rules, or character options for you to read. Although this is helpful, it is always better to get the book itself. If you want to take a look at some of these websites, check out the links below:

The second thing you need is a character sheet. This is a form you’ll fill out that will contain all of the information on your character. Typically, you’ll print this form and fill it out in pencil. Some people prefer to keep a digital copy of their character sheet on their cell phones, computers or tablets. Character sheets are readily available as a free download on their official websites. Links are below.

The third thing you’ll need is some dice. For most d20 games you’ll need at least one four-sided dice (a d4), one six-sided dice (a d6), one eight-sided dice (a d8), one ten-sided dice (a d10), one twelve-sided dice (a d12) and one twenty-sided dice (a d20). Most players also have a percentile d10. Some players prefer to have multiples d20s, d6s or d4s, but this is optional. As long as you have one of each you’ll be ready to get rolling! Sound difficult? Not so! Most gaming shops and many comic shops stock some dice, typically in a container with one of each type of necessary dice–or more. Everything you’ll need to play. There’s a lot of different brands of dice out there, but if you’re just getting into the game I’d suggest checking out Chessex or Koplow dice. They have a lot of colours and styles to choose from, and are typically affordable. Whatever kind you choose, make sure you pick some that are easy to read. You don’t want to be squinting just to read your dice! Chessex – Borealis Dice Set (Sky Blue with White)

are a great choice that offer free shipping, as are Koplow – Blue/White Glitter

. Looking for something flashier? Q-Workshop has gorgeous dice at a higher price point, like these Q-Workshop – Pathfinder Iron Gods Dice Set 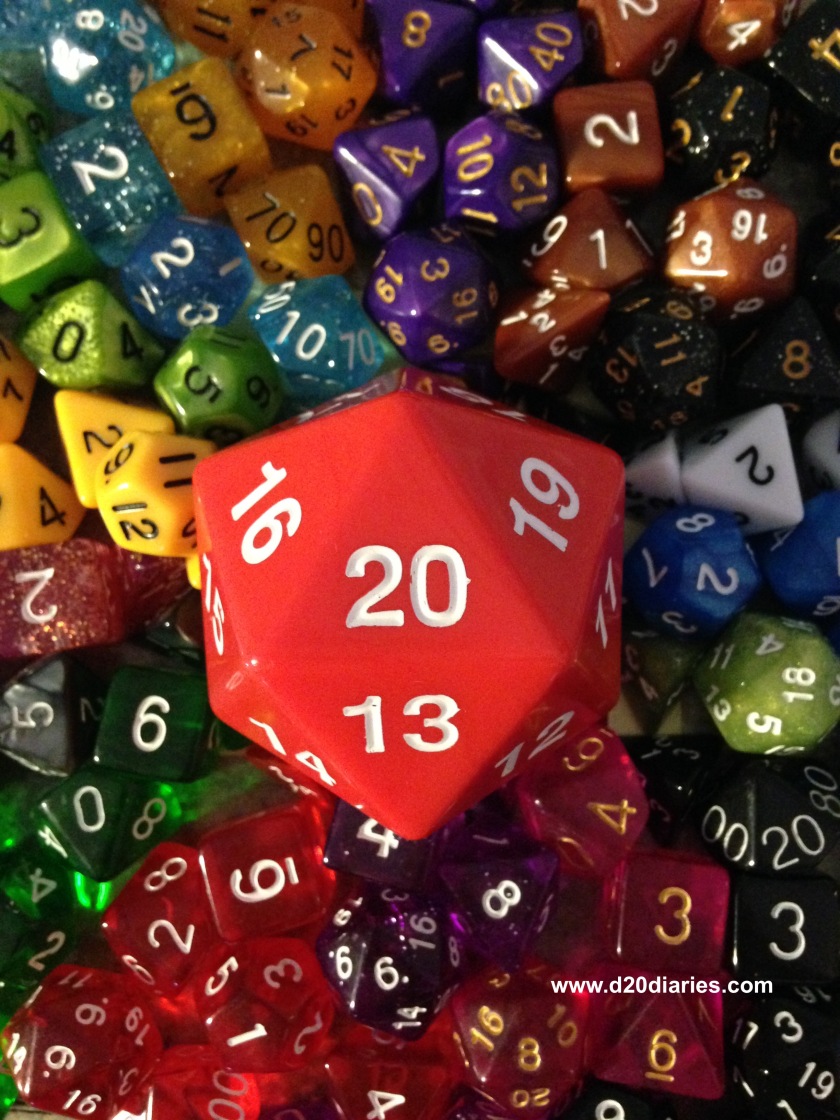 Once you’ve got your dice in hand, it’s time to pick out a token, or a mini, to represent your character. If you’re going to be playing with an experienced Game Master, it’s likely they have minis that you can borrow in their collection. If not, you’ll need to pick up one of your own. There are three major kinds of minis: Plastic Pre-Painted minis, Unpainted minis, and 2-D Pawns. I highly recommend picking up a single collection of 2-D pawns, Pathfinder Pawns: NPC Codex Box

. This is an entire box with hundreds of 2-D pawns inside, all of which are perfectly suited to be characters, allies, or enemies, including bases to stand them on. This is BY FAR my favourite option for player character minis. Those of you playing Starfinder will instead want to pick up the Starfinder Core Pawn Collection

Plastic minis are nicer looking than the 2-D Pawns, and are easier to use. However, they aren’t the most affordable option. Both Dungeons and Dragons and Pathfinder’s pre-painted plastic minatures come in Starter Sets or Iconic Heroes Sets (which are a collection of minis that you can see in the packaging) and blind booster boxes (which are a random collection of four minis which you cannot see until opening the box). Both sets are made by WizKids. Dungeons & Dragons Icons of the Realms Starter Set

is a great choice for starter packs from Dungeons and Dragons, while Pathfinder Battles: Iconic Heroes Set 5

is a good choice from Pathfinder. As for blind boosters, I suggest you pick up a box or two of Pathfinder Battles: Legends of Golarion Booster

from the Pathfinder Battles line. If you are going this route as a player, the best way to get a nice pre-painted plastic mini is to stop by your local game shop in person. Many games shops have a collection of plastic minis that you can buy from individually, which makes this a great choice for beginners if you have a local game shop you can visit. 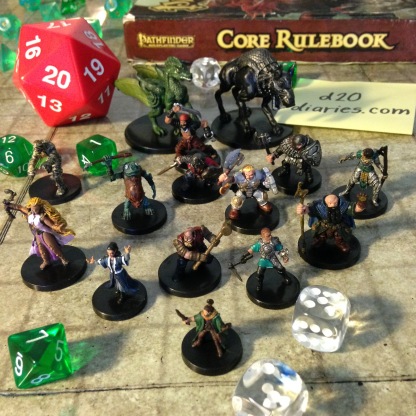 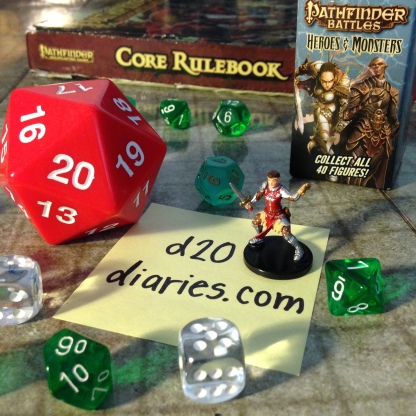 The last option is by far the most expensive and time consuming: unpainted miniatures. However, painting these tiny figures is often a hobby in itself. If you’re in the market for unpainted minis I suggest taking a look at Reaper Miniatures website, which has hundreds of options, or have a custom one made at Hero Forge (Careful! It’s addicting!). If you decide to go this route, you’re also going to need paints, base coats, and a few paint brushes.

If you’re going to be the Game Master, you’re also going to need miniatures for your players to fight against. You’ll need to invest in either plastic miniatures by WizKids, as mentioned above, or a box of Pathfinder Pawns, which is my preferred method. If you’re looking to get some pawns I highly recommend picking up Pathfinder Pawns: Bestiary Box

, which has hundreds of awesome 2-D pawns and bases to use with them. There’s plenty of Bestiary Pawn Box collections in addition to the Bestiary Box, including Pathfinder Pawns: Bestiary 2 Box

. Those of you playing Starfinder will instead want to pick up the Alien Archive Pawn Box

The next thing you’re going to need is something to play on. This is provided by the Game Master, so if you’re only going to be playing you don’t need to worry about it. But, if you’re going to be running a game for others, you’re going to need to invest in a play surface with a one inch grid. Play mats are by far the cheapest option. All you need to do is pick up a basic flip map and some dry-erase markers to go with it. My personal favourite is Pathfinder Flip Mat: Basic Terrain Multi-Pack

. Other options include map tiles, which are a collection of premade rooms and corridors which can be fit together on a room by room basis to create a detailed play environment quickly. The biggest problem with this route? You’ll always wish you had more. For a wide array of map tiles check out the Pathfinder and Gamemastery Map Packs, on Paizo’s website, or the newer Flip-Tiles. 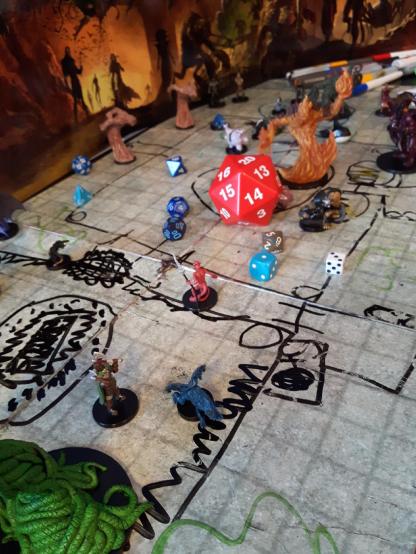 A blank playmat with a dungeon drawn onto it.

A dungeon created by my young son with map tiles.

The last, and most important thing you need to play a d20 game? People to play it with. d20 games like Dungeons and Dragons are collaborative, social games. So find some other friends or family members who are willing to play with you, stop by your local game shop and ask if they host any organized play events, or keep an eye out for a gaming convention near you. You’ll be surprised how many people you know are willing to play! Not having any luck? Check out our article on play-by-post gaming on d20 Basics (coming soon!).

What are you waiting for?

Get into the game!