Today on d20 Diaries we’re celebrating by sharing all things ‘love’ from Pathfinder. So whether you’re a romantic looking for love like Aldern Foxglove (who you can meet in Rise of the Runelords Anniversary Edition

) a jilted, jaded loner like the Stag Lord (who you can meet in Kingmaker Part 1 – Stolen Land

), or a parent who would do anything for their children like Nadya Petska (who you can meet in Reign of Winter Part 1 – The Snows of Summer

), we’ve got you covered! So slip on your sleeves of many garments (Pathfinder: Ultimate Equipment

) to get that perfect look and get ready to celebrate Valentine’s Day in style!

We’re starting simple, with a collection of mundane equipment that can make Valentine’s special for even the lowliest level one character! Prepare yourself for the day with a grooming kit and some perfume/cologne. Head out for a lovely carriage ride, or to see a show. Read poetry (if you’re literate), or serenade that special someone with a musical instrument.  For dinner, set the mood with a candle and candlestick, and be sure to bring a bottle of wine and some chocolates. All of these items are available in Pathfinder: Ultimate Equipment

But, for those of us who are higher than level one, chances are you’ve got some cash to burn! Let’s take a look at some pricier options! Unless otherwise listed, all of the items below are from either the Core Rulebook

Still trying to catch the eye of that special someone? Be sure to get your armour and weapons glamered. Up your game with a circlet of persuasion, headband of alluring charisma, or a headband of seduction. Really put in the effort with a Zonzon Doll of Forgiveness (Inner Sea Gods

) tailored just for them! Or skip the effort completely and invest in a staff of charming, or eyes of charming.

Trouble Hanging on? Love keep slipping through your fingers? Be sure to invest in some tanglefoot bags, silk rope, an elixir of love, philter of love (Advanced Player’s Guide

Beloved often caught in the thick of things? Give them a paper flower favour (Heroes of the High Court

) as a token of your affection. Always keep an eye out for them with kinsight goggles.

Got someone you’d do anything for? Invest in an allying weapon, martyr’s tear and a ring of friend shield.

Can’t bear to be separated? Pick up a bracelet of friends.

Worried about all that romance (and enchantments) clouding your mind? A cap of the free thinker should help keep your head on straight! While the Liberator’s Rod will give you a second chance to see to the heart of the matter.

But enough about romance! Some character’s love life in general! So if you’re the kind of adventure who would rather preserve life than end it, pick up a merciful metamagic rod  or a merciful weapon. Then try out some benevolent armour.

Broken Hearted? Share your pain with a heartseeker, seeking or stalking weapon. They’ll regret tossing you to the curb!

My personal choice for the most romantic in-game gift? Boots of the winterlands! It’s quite cold where I live. Haha.

But love isn’t all about stuff! Up next we’re taking a look at the gods of Pathfinder, some loving, some possessive, and some plain evil! All of the gods listed below can be found in Inner Sea Gods

, although some are in other sources, as well.

If you’re going to make a character interested in love you’re definitely going to want to take a look at Shelyn, The Eternal Rose, the popular goddess of love, beauty and art. If you’re a dwarf you’ll instead check out Bolka, The Golden Gift, goddess of beauty, desire, love and the goddess responsible for making arranged marriages blossom into loving relationships (Dwarves of Golarion

). For a less obvious faith, take a look at Hembad, the Wise Grandfather, an empyreal lord of connections, matchmaking and synergy. Contrariwise, Naderi is the heartbroken goddess of love, romantic tragedy, suicide and drowning (Inner Sea Faiths

Looking to tackle a more physical aspect of love? Calistria, The Savoured Sting, is the most popular choice. She’s the elven goddess of lust, revenge and trickery. Or take Arshea, the Spirit of Abandon, for a spin! He’s the androgynous empyreal lord of freedom, physical beauty and sexuality. Try going the opposite direction and take a look at Lymneiris, The Auroral Tower, an angel interested in prostitution, rites of passage, and virginity (both of whom are featured in Chronicle of the Righteous

). Take a walk on the darker side of sex with Ardad Lili, the infernal Whore Queen of seduction, snakes and women (Princes of Darkness

) or with the Green Mother, a divine fey interested in carnivorous plants, intrigue and seduction (The First World, Realm of the Fey

Want to worship a god worried less about romance, and more about family? Erastil, god of family, community, farming, hunting and trade, is the most well-known option. Although plenty of others exist. For dwarves there’s Folgrit, the Watchful Mother, goddess of children, hearths and mothers (Dwarves of Golarion

). For giants there’s  Bergelmir, Mother of Memories and goddess of elders, family and genealogy (Giants Revisited

But love isn’t always good. Love of all kinds can be twisted into something foul. If you’re looking to take a look at the darker sides of love, lust and obsession, check out these horrible devils, demons, daemons and other foul beings: Belial, Archdevil of adultery, deception and desire (Princes of Darkness

); Slandrais, a daemonic harbinger interested in lechery, love potions and obsession (Horsemen of the Apocalypse

); Zaigasnar, a daemonic harbinger interested in body modification, destructive vanity and pins (Horsemen of the Apocalypse

If you’re interested in bringing love and heartbreak into your game further, try using nymphs (Bestiary

) in your games as enemies, as well as enchanters of any kind.

). Clerics and other classes with access to domains can check out the charm, community and good domains (Pathfinder Core Rulebook

), as well as the cooperation (Inner Sea Gods

), family, home, love, and lust subdomains (all from the Advanced Player’s Guide

). Inquisitors can check out the seduction inquisition (Inner Sea Intrigue

). Spiritualists can make phantoms with the dedication, despair or jealousy focus (all from Occult Adventures

), as well as the kindness focus (Psychic Anthology

) or ‘at the heart of it all’ (Ultimate Magic

) masterpieces to their repertoires. Characters of all classes can benefit from the feats: Cursed Love (Agents of Evil

There’s a ton of spells in Pathfinder that have to do with love, lust and infatuation, most of which are enchantments. Some of my favourites include charm person, charm monster and enthrall, all of which are from the Pathfinder Core Rulebook

Lastly, we’re going to take a look at a few adventures that are the perfect fit for Valentine’s Day. 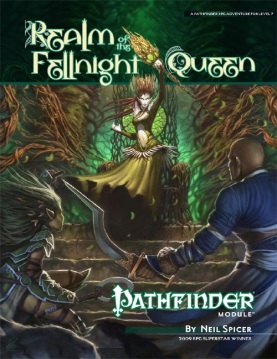 My personal favourite is Realm of the Fellnight Queen

! This Pathfinder adventure module is intended for level seven characters and was written by Neil Spicer as his winning entry in RPG Superstar 2009. This wonderfully written adventure begins as the players attend a wedding ceremony for a friend. The wedding itself is a blast, with activities for the players to participate in, a great cast of colourful NPCs for them to interact with, and a feast in addition to the wedding. But soon a love-spurned gnome crashes the wedding with his beloved bees at the behest of his mistress, Queen Rhoswen. The players will have to save not only the wedding, but the entire town from the Fellnight Queen’s machinations by heading deep into the forest and entering her extra-planar realm! This adventure is just a blast to play! I highly recommend it!

For adventure’s about familial love, I recommend playing Racing the Snake or Final Resting Place. Both are 3.5 Dungeons and Dragons adventures published in Dungeon Magazine. Racing the Snake is by John Simcoe and is found in Volume 105. It’s intended for level six characters, and has the PCs hired by a nobleman to protect his beloved daughter from assassins–with a twist! While she travels secretly to her wedding in the capital, the PCs get to impersonate her and lead her assassins and enemies on a wild-goose chase until she’s safe and sound! This adventure has interesting encounters and really tips the regular format on it’s head! Final Resting Place is written by Michael Kortes and is found in Volume 122. It’s intended for level three characters, and has the PCs hired by the daughter of a famous adventurer who recently perished on an exploratory mission underground. Knowing her father is dead, but unable to come to grips with it without his body, the PCs are sent underground to the site of his last mission, in order to return his body to his daughter for a proper burial. This adventure is one of my all-time favourite 3.5 adventures and is a TON of fun.

But what about all those lover’s scorned out there? I’d suggest giving Curse of the Riven Sky

or Clash of the Kingslayers a whirl. Both are larger than life, awesome level ten Pathfinder modules that are driven in one way or another by the heartbroken, the betrayed, and the angry lovers out there! And best of all? As your player’s discover the motivations and history of the NPCs involved, they’ll question their cause, enemies and allies in a way they haven’t had to before. Both are definitely worth a whirl! Curse of the Riven Sky

is written by Monte Cook, while Clash of the Kingslayers is written by Leandra Christine Schneider (and currently on sale for only two dollars American).

Want to worry less about morality and more about destroying something beautiful and having a BLAST? Take We B4 Goblins for a whirl! This FREE Pathfinder adventure makes the player’s all goblins fresh out of their whelping cages, and sets them loose on some super fun rites of passage which culminates in an attack on a halfling wedding! Smash the cake, terrorize the guests and work out all your anger on the happy couple! The goblins are crashing the party!

Romantic love isn’t the only kind that causes pain and heartbreak. These next two adventures revolve around what happens when family is taken from us. Murder in Oakbridge is a murder mystery printed in Dungeon Magazine volume 129, written by Uri Kurlianchik and intended for level five characters. Wingclipper’s Revenge was printed in Dungeon Magazine volume 132 and pits the PCs against the perils of the fey (and man!). It was was written by Christopher Wissel and is intended for level four characters.

If you’re into the Pathfinder Society, try playing Scenario #27: Our Lady in Silver, or Scenario #4-09: The Blakros Matrimony. Our Lady in Silver unleashes our Pathfinders upon the desert nation of Qadira. It’s written by James McKenzie for tiers 5-6 and 8-9. The Blakros Matrimony takes place on Pariol Island outside of Absalom, an island owned entirely by the infamous Blakros family. It is written by Thurston Hillman for tiers 3-7. Both are unique adventures that are a ton of fun.

)! With rules for how to befriend and woo each member of the caravan, and updates in every volume for what items, events and places have meaning to each NPC, this adventure path is the first (and only) one that pays loving attention to the side characters right from the start of the campaign, to the end. If you want to get in on a game where relationships matter, give Jade Regent a try. The player’s guide is available as a free download, here.

That’s all we’ve got for you today!

No matter who you are, and what kind of love (or lack of) you’re celebrating today, I hope you enjoyed taking a look at the many ways you can spread the love with Pathfinder!

All the best, and Happy Valentine’s Day!