My children love d20 games. My son’s favourite is Pathfinder, while my daughter’s is Starfinder. They love to make characters, craft adventures, play online via play-by-post, and play as a family at our dining room table. But, they need help. The rulebooks use a lot of complicated jargon, and, even though my son reads well above his grade level, they’re still only six and seven. The books aren’t really geared at kids that young.

There are other games out there, of course. Easier games we could invest in, learn, and play, but that’s always a gamble. Besides, who says they’ll be a better fit for a young kid?

Recently a fellow gamer, who happened to be playing alongside both of my children via play-by-post, suggested that I give a game called Tails of Equestria a try. She and her daughter had recently played it at Origins and had enjoyed it.

My first thought was: My Little Pony? My kids love my little pony!

Followed closely by: My Little Pony? I love my my little pony!

There were plenty of other thoughts that followed.

For those of you who don’t know My Little Pony: Friendship is Magic is a super popular kids show. It’s aimed at girls, but I know just as many boys who enjoy it as much as girls. As a bonus, it’s hilarious. My husband and I both enjoy the show immensely. Its one of those shows that typically Mom and Dad don’t mind being on while they’re in the room. I know I certainly enjoy it more than a lot of other shows my kids like.

Even if you don’t have kids of your own, or young relatives who have watched it, the stores are filled with movies, toys, and games featuring the characters.

But, what the heck is Tails of Equestria?

I looked it up. For starters it’s full name is Tails of Equestria: The Storytelling Game. It’s a nice thick hardcover book, and on the back it explains simply and plainly that it is a cooperative storytelling game, where multiple players and a GM forge a tale together. Then it goes on to clearly and simply explain what a Game Master is, and how the game works. 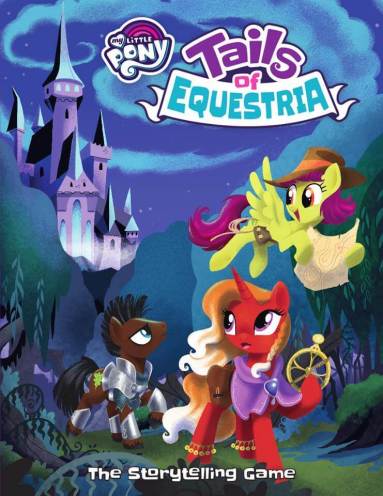 Right there, on the back is a clear, concise, easy to understand description of what the heck a d20 game is. And it revolves around a world my kids already know and love. The whole book is like that. It does away with jargon, and presents a streamlined, easy to understand game. At the same time, it doesn’t talk down to you. An awesome introductory d20 game that looks like a ton of fun. Light-hearted, family friendly, fun.

A lot of the book is devoted to creating your very own pony. The character sheets looks fun and even have a little template for a blank pony, so your kids (and you) can draw in your own pony details and appearance and still come out with a decent looking horse.

Perhaps the best part? It has a strong focus on teamwork, and overcoming obstacles together. In fact, parts of the game are built specifically to reward players for cooperating and being generous. Although battle is a component of the game, it’s not the focus. ‘Scuffles’ are short and rare. More often, you’ll be aiming to avoid, befriend, calm, or trick an enemy. It’s a nice change of pace, but definitely means that games are going to be structured differently that I’m used to. Luckily, the book itself has a sample adventure right in it. And a relatively involved one, at that.

The only problem? Getting my hands on it!

Tails of Equestria: The Storytelling Game

is available on amazon.ca. As is Tails of Equestria Expansion – The Festival of Lights

and Tails of Equestria Expansion: The Curse of the Statuettes

, although they are very expensive. Both expansions are actually long adventures, some of which come with extra material, like a GM screen, dice, character sheets, and so on. The Bestiary of Equestria is available, but not in stock. Amazon.com has all of the products in stock and available, although then I would have shipping, duty fees, and the exchange rate to worry about. I also found the main book available on paizo’s website, although the others aren’t. There is a local game shop or two in my city that might have it. I’ll have to check.

Unfortunately, while I scoured the internet for information, my children peeked over my shoulder and saw exactly what I was looking for.

They then immediately proceed to ask when we could get it. Could they have it as an early Christmas gift? How about a graduating from Kindergarten and Grade 1 gift? Just because I love them? But, they’ll do chores!

“You know, Mom. You promised we each could get one book after school was over, but it had to be a tough one that we would work at reading this summer. You said we could pick it out ourselves. I think that book looks pretty tough…”

Yeah, Mommy had a much smaller budget in mind for that book, kids…

The conversation soon evolved into discussing what I had learned about the game system, followed by my kids contemplating what kind of characters they’ll make.

I honestly cannot express how excited they are. They’re just…

Man, they look so happy. Haha.

Now, if only I had an excuse (and the funds) to buy it for my children…