Today we’re going to take a look at the two most recent Starfinder Society Scenarios that are currently available for purchase, and let you know we thought. Although you’ll find references to events in each that I liked or disliked, and comments about specific characters, these scenarios are not explored in detail. It’s not my intention to spoil the events in these scenarios, or give summaries and full reviews, but to share my opinions and provide recommendations. That said, if you want to avoid even minor spoilers I recommend you check out a different article. Whether you intend to use them in home games of the Starfinder Roleplaying Game

, sanctioned scenarios for use with the Starfinder Society Organized Play, or just want to read a nifty new adventure, we’ve got you covered! So sit back, and get ready to explore the Pact Worlds! 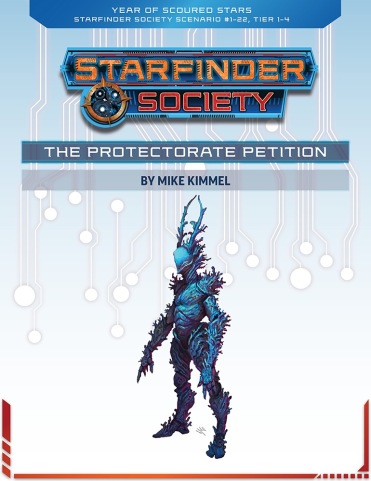 Scenario #1-22: The Protectorate Petition is a Tier 1-4 adventure written by Mike Kimmel. It takes place on Tabrid Minor, a planet in Near Space that has a population of around two billion. The dominant race on the planet, the copaxis, have applied to the Pact Worlds for Protectorate status. The Stewards have hired the Starfinder Society to conduct an independent review of the ruins of an ancient flying city located on Tabris Minor, with the help of some locals. You’ll need to learn all you can about the cobaxis, their culture, and their history. Once you’ve got a feel for them and their past it will be your job to write a report which will either approve or deny Tabris Minor’s request for Protectorate status. This scenario features no special scenario tags, does not include starship combat, and does not continue any ongoing storylines. It makes use of Pathfinder Map Pack: Ruined Village

. In addition to the Starfinder Core Rulebook

. There is a single familiar face in this scenario: the always delightful Venture-Captain Arvin, as well as a host of new NPCs. It introduces a member of the Stewards: Major Tower-9, who will hopefully be featured in another future scenario. The copaxis are a really interesting race. Each individual is actually a colony of microorganisms which live within a single humanoid-shaped exoskeleton and act as a single unit. They’re basically coral-people. There are also a lot of interesting NPCs in this scenario from among the copaxis themselves, including Bryanisis, Gnaucara, Panacula, and Therseis. My personal favourite? Less Than Three (of whom I will divulge no further details).

Exploring the ruined flying city of Tabantria is a lot of fun, with some locations already excavated and safe, and others still dangerous. There’s opportunities to glean interesting information at both types of locations, as well as copaxis researchers you can turn to for context and advice if desired. Although I don’t want to give away anything about your discoveries, I will say that things are more… complex that they seem. It’s wonderfully handled. There’s some fun battles in this scenario, all of which can provide the PCs with some information. I particularly enjoyed the new crab-like creature known as the corchaaz which can alter gravity and even use some solarian powers! Very cool. There’s no particular boons you’ll want to slot for this one, although members of the Dataphiles, Exo-Guardians, and Wayfinders all should naturally have the most interest in this scenarios goals. If you’ve got a solarian, now is a great time to play them. Solarians have a few unique benefits throughout this scenario. Overall I really enjoyed this scenario. I give it four out of five stars. 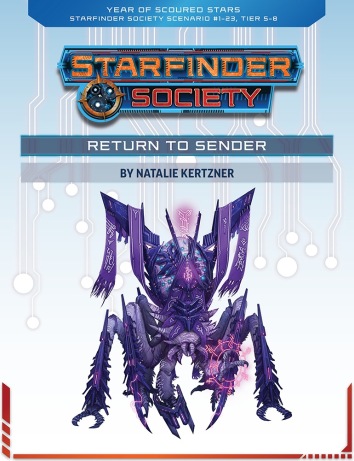 This mission begins when Historia-7 (leader of the Dataphiles) flies the PCs to a secret facility run by Radaszam (leader of the Acquisitives) and maintained for his Obsidian Spiders mercenary company. Together the duo gives the PCs an off-the-books mission. Their job? Take a recovered jinsul ship and fly to a space station on the edge of the system. Infiltrate the jinsul base, learn all you can, and destroy it (with the help of Historia-7 and Radaszam!). This scenario features the Faction (Acquisitives) and Faction (Dataphiles) tags and uses two custom maps. It features content from Starfinder: Alien Archive

, but all relevant information is included in this scenario. There’s no specific boons I’d recommend slotting (other than the faction boons, of course) or classes to take. It is worth mentioning that one enemy in this scenario has an ability that could allow them to foil the operative’s trick attack ability.  Return to Sender is intended to be a dangerous infiltration mission with a nerve-wracking atmosphere. You’re supposed to worry over alerting the base to your presence, while learning all you can. That said, the path laid before you is noticeably linear, with no real repercussions for being discovered. It runs the risk of feeling like a long, drawn out slug-fest. Room, fight, hack a computer. Room, fight, hack a computer. And so on. This is one of those missions that really requires a talented GM to make it shine. That said, I particularly liked the final battle, and the scenario’s cinematic ending. In my opinion the best part of this scenario was actually nothing to do with the mission at all. Throughout it the PCs get to hear Radaszam and Historia-7 banter over the comms and learn more about the duo. PCs also have the opportunity to release and befriend and adorable little alien that behaves like a goofy puppy dog and looks like a mix between a shark and an octopus, with big, cutesy eyes and a lolling tongue. This little fellow’s antics can either be played up (for groups who would enjoy some comic relief) or fall to the wayside (for groups who are enjoying a more serious, suspenseful playthrough). I think the fact that the option was given for this creature to serve different roles for different kinds of groups was a really nice addition. Although this mission will be a great fit for some players, it just wasn’t my cup of tea. I give it three out of five stars. 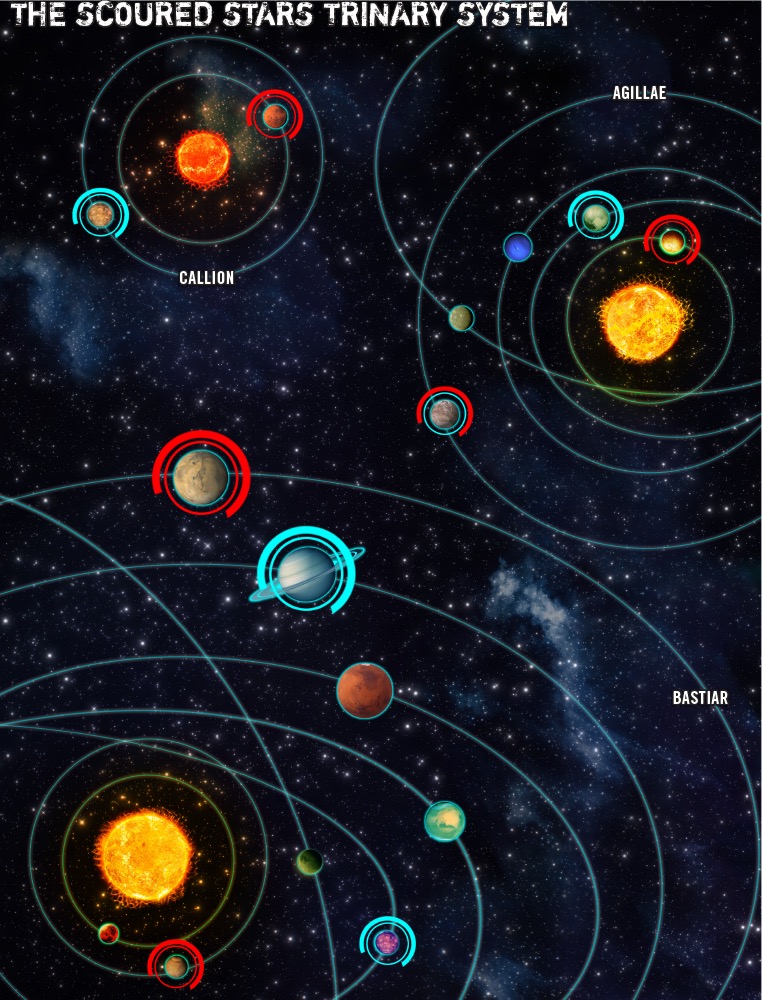