I’ve already mentioned that Starfinder has launched their new Adventure Path: Against the Aeon Throne. I’ve talked about it, geeked out about it, watched Paizo’s twitch stream, and generally wished I owned it. It looks like a ton of fun. My husband nodded his head and gave me a ‘that’s nice’ sort of look. Clearly not as excited as I am, haha. And my kids? Excited, but not obsessively so.

Until they saw the preview.

Yeah! Preview! The trailer! Like a movie trailer for an adventure path. It explains the premise and basics of the campaign clearly, quickly, and concisely. It sounds awesome, it’s got great art. And it generally made me start salivating all over again.

As soon as it started my kids wandered over to see what I was watching. They sat still…. and stared….

And when it ended my kids literally started shrieking all at once.

“THIS LOOKS SO MUCH FUN!”

“YOU NEED TO BUY THAT FOR ME! NO! I will tell DAD to buy it for YOU for YOUR birthday!”

“THAT’S TOO LONG! AN EARLY BIRTHDAY!”

“A… thanks for going to school gift? Can I have one of those? I am in grade one now, Mom.”

So on and so on. We laughed, and I figured they’d soon wander off.

Instead they pulled out the Starfinder books and started making characters for Against the Aeon Throne. They didn’t have time to finish before bed, but the next day on the walk to school it was all they talked about. And the day after, on the weekend, we spent our time at the laundromat creating their characters together.

My son made a contemplative technomancer who is a scholar with a focus on the fields of ecology and alien ecosystems. He dabbles in illusions, mind magic, and technology, but takes special care to use magic that doesn’t harm the environment, and to create clean, sustainable technologies. His contemplative travels to Nakondis to help his friend study the starship drive on the mysterious crashed ship she is studying there. In addition, he’s going to ensure that the new colony of Madelon’s Landing treats the planet of Nakondis with the respect it deserves.

And my daughter? She has a character image she discovered ages ago on Pinterest that she’s been saving for something special. She’s making a ysoki ninja! White furred, with pale pink attire, a dagger and a stun gun. She’s going to be an operative, although she’s torn between selecting the ‘daredevil’ and the ‘ghost’ specializations. She plans to focus on both acrobatics and stealth, so she’s undecided. Either way she’s going to be a nimble, tricky combatant comfortable in close range and melee combat.

Then they got to work asking what I would play, and badgering my husband for his character concept.

The only problem? I still don’t own it. Haha. Guess I’m investing in Against the Aeon Throne sooner than expected!

Grumpy over our inability to begin playing, my kids settled in with my husband to watch the finale of Voltron: Legendary Defender. They loved it, and when they end came they headed right over to the block bucket and got building.

Last time they built starships they did so with LEGO, but this time they used Duplo. Duplo is like bigger sized LEGO. It’s kind of marketed for toddlers, while LEGO is for kids, but my kids ADORE their Duplo (yes, even more than their LEGO). With LEGO they build things, but locking in the blocks sometimes hurts their fingers, and for some reason they feel compelled to find and follow instructions when they use it. They don’t often just build something grand from their imagination with LEGO. But with Duplo? It’s different. They never look at instructions. The blocks don’t hurt. They just come up with the craziest things, and build. Usually it’s full cities and markets with multiple buildings and roads and things. Trains and other vehicles are popular. Sometimes amusement park rides (that move). Once in a while they build mazes multiple layers deep. A while back my husband and I were watching ‘In The Heart Of The Sea

‘ on Netflix and although my husband and I liked it my kids were bored out of their minds. Instead of watching my son sat down with blocks and built his own massive whaling ship. It was the right ship, had masts and sails, and even miniature rowboats on it. It was literally a massive, awesome ship. It even had a removable top deck so you could look inside. It was, hands-down, cooler than anything I’ve ever built.

So, I wasn’t surprised when they started building something together. They had a plan, and they chatted and got to work. When it was done they called me over. They had made a big starship, a few feet long and almost a foot wide. They stacked it on stilts that they attached to wheels, so it could drive around the house while the ship itself was still hovering off the ground.

They shook their heads.

“This is not just ANY starship, Mom. THIS is a Galra battle cruiser! The really big ones. See!”

I looked at it again and nodded. It looked like the right shape and everything. I could see it.

They showed me the bridge. If you’ve got little hands (which I do not, haha) you can slip a hand inside and put figures inside. There’s even chairs and computer consoles in there. Impressive. They showed my the really big gun turret they built on top, which really does spin. They named what kind of gun it was, but in all fairness, I’ve forgotten it’s name (shame on me, I know). It was the big one. Haha. They showed me the thrusters and the engine bay. They showed my the medical bay and the prison cells. They pointed out that the prison cells had toy lions in them because in the finale they had just watched the villain captures the hero’s lions (they’re sentient lion-shaped starships, in case you have no idea what I’m talking about) and locks them up. Cool!

Anyways, I was so impressed we took a bunch of photos I thought I’d share below. My kids are very proud. They’re still waiting for Against the Aeon Throne. And they’re still excited. But, for now, they’re happy their creation is getting shared with the world.

Thanks for joining us today,

A LEGO Duplo starship created by my children. 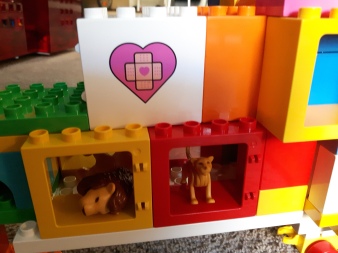 Oh, no! The Lions of Voltron have been captured!

A LEGO Duplo starship created by my children.

3 thoughts on “Preparing to Rebel!”