My husband, my children and I headed out for a trip to our local game shop. There’s a few places you can go in Winnipeg for RPG products, but our shop of choice is Game Knight Games and Cool Stuff. It’s a bit of a trek to get there, two buses and at least an hour and a half of travel time for us, but it has a great selection of RPGs, board games, miniatures, and collectible card games. They also have a spacious game space. It’s a wonderful store. The buses were accommodating, and we made good time. In no time at all we headed inside and perused the goodies on offer. There was quite a selection! Over ten books to choose from, but with only one per customer. Luckily, there were four of us.

There were two products we knew we wanted to bring home with us: ‘Skitter Shot,’ a Level 2 adventure for the Starfinder Roleplaying Game

written by Jason Keeley; and ‘We Be 5upergoblins,’ a Level 6 adventure for the Pathfinder Roleplaying Game

, written by Crystal Frasier. But the other two? We had no idea. Something new.

Deciding we should pick out our purchases before picking up our free RPG books, we spread out around the store to browse.

For Father’s Day, we wanted to get my husband a book of his choice, so we set him loose on the store. He ended up choosing Pathfinder Player Companion: Blood of the Ancients

. Those of you who follow this blog will know that I’ve been dying to get my hands on this awesome new release, so we were very pleased with his decision. Haha.

My kids also got a small budget of five dollars to spend on themselves. Not much, I know, but they accepted the challenge with enthusiasm. My daughter fell in love with a set of pink dice, which was too expensive. As she agonized over the cost and attempted to convince me she would empty out her piggy bank (which contains about two dollars) to make up the difference, my son browsed the boxed minis. All too expensive, of course. So, the three of us moved on to the singles cabinet. They looked over the plastic pre-painted minis, and squealed over all the expensive ones. They each found a mini they liked, but we moved on too keep browsing. In the end, they pooled their budget and picked out three boxes of unpainted miniatures. Pathfinder Goblin Pyros (89002)

which is a lovely clear purple colour.

With our purchases in hand we headed over to peruse the Free RPG books up for offer. As already mentioned, there were a lot of cool choices, most of which we didn’t know anything about. Exciting!

My six-year old daughter immediately scampered over to the table and swept up Skitter Shot! While I grabbed We Be 5upergoblins! This left my son and my husband a bevy of books to browse. In the end, my husband settled on a book for Numenéra, which he had heard good things about. My son fell in love with the maps inside a Dungeon Crawl Classics book, so he hugged it close, I paid for our products and left.

We took a walk down the road for lunch to eat at a local Mexican restaurant called Carlos and Murphy’s, which everyone enjoyed, and then headed home for the best part: reading them. In short: they were awesome!

Dungeon Crawl Classics, by Goodman Games, came with basic rules and character details for making characters of up to second level, as well as character creation rules and two different adventures. One for level 0, entitled ‘The Portal Under the Stars,’ and one for level 2 entitled ‘Man-Bait for the Soul Stealer.’ This game has a definite old-school D&D feel to it. Also, it’s SUPER deadly. You roll up a bunch of meek peasants and hopefully one of them will survive long enough to reach level 1 where they can choose a class. The random character creation rules were quite fun, and the adventures were entertaining. My son loved all the black and white artwork in this book — of which there was a lot! He also loved the maps. All in all, it’s not my cup of tea, but as a family we liked the system — especially my son. He’s super excited to get to put it on his bookshelf, instead of mine. For the full rulebook, pick up: Dungeon Crawl Classics

, which uses the Cypher System and is published by Monte Cook Games. The adventure is written by Sean K. Reynolds. Chances are, both of those names are familiar to you. Haha. In addition to containing the adventure, it also contains details on the setting, some of the rules, a mini-bestiary, a link to a collection of pre-generated characters. It also comes with a nifty coupon that could earn you a second free adventure if you purchase a Numenéra sourcebook from the same store you got the Free book from. A pretty solid pay off! We really enjoyed the Cypher System, although it will certainly take some getting used to. I also like that the focus of the game is discovery. Not battle or influence. Discovery. I feel like it’s going to be very character and role play driven. I can’t wait to give it a try. 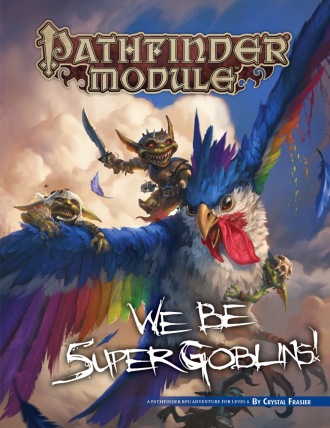 ‘We Be 5upergoblins!‘ is a level 6 Pathfinder Module written by Crystal Frasier. It’s the fifth instalment in the much beloved ‘We Be Goblins’ series. It should go without saying — but I’ll say it anyway — that this adventure was AWESOME. Hilarious. Entertaining. I burst out laughing many times while reading it. It’s just a ton of fun! It’s also sanctioned for Pathfinder Society Play, which is an extra bonus, and comes with four regenerated goblins: Chuffy Lickwound, Mogmurch, Poog of Zarongel, and Reta Bigbad. So what’s up this time around? These crazy goblins explore the wonderful world of Bagland. It’s awesome, I promise. My kids particularly enjoyed the character ‘Golgum the Tall.’ And the ending? So good! If you didn’t get your hands on this amazing product, don’t worry. You’ll be able to download it for free on Paizo’s website in two weeks or so, and can purchase a physical copy for around five dollars American. 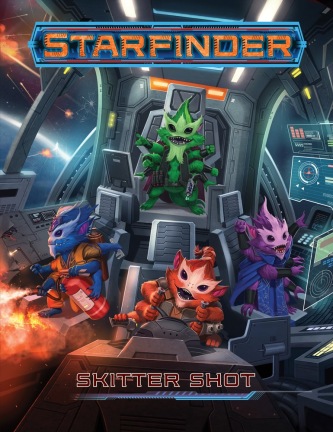 The last book we got out hands on was ‘Skitter Shot,’ which is a level two module for the Starfinder RPG written by Jason Keeley. It’s sanctioned for use in the Starfinder Society, and even gives you a boon which can (with a lot of work) allow you to unlock Skittermanders as playable race! AWESOME! But, enough about the boons, what’s up with the book? This delightful adventure lets your players take on the role of four adorable and enthusiastic skittermanders who work on a salvage ship with their vesk boss. Unfortunately, their boss went out to scavenge what he could from an abandoned luxury liner, and hasn’t returned! Lucky that skittermanders love to help! The pregenerated characters are really fun to play and sufficiently unique. The adventure was a lot of fun. So fun, in fact, that we played it today.

It’s a BLAST. I highly recommend it.

If you weren’t able to get a copy on Free RPG Day, a free download will be available in another few weeks on Paizo’s website. Keep your eyes open!

The products we purchased were great. My kids love their new minis, and Blood of the Ancients was as great as my husband and I hoped. I’ll be dedicating an entire post to it later this week.

I hope a lot of you got out to Free RPG Day! If you did, I’d love to hear what kind of products you got your hands on, and what you thought of them.