Today we’re going to take a look at the two most recent Starfinder Society Scenarios that are currently available for purchase, and let you know we thought. Although you’ll find references to events in each that I liked or disliked, and comments about specific characters, these scenarios are not explored in detail. It’s not my intention to spoil the events in these scenarios, or give summaries and full reviews, but to share my opinions and provide recommendations. That said, if you want to avoid even minor spoilers I recommend you check out a different article. Whether you intend to use them in home games of the Starfinder Roleplaying Game, sanctioned scenarios for use with the Starfinder Society Organized Play, or just want to read a nifty new adventure, we’ve got you covered! So sit back, and get ready to explore the Pact Worlds! 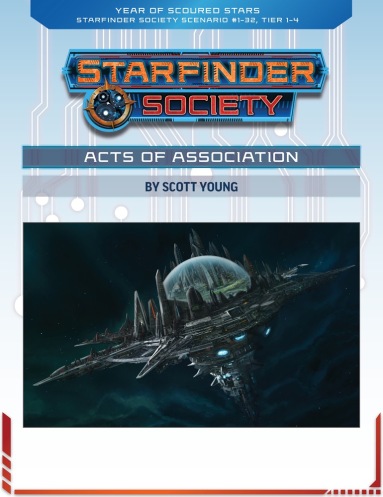 Starfinder Society Scenario #1-32: Acts of Association  is a Tier 1-4 repeatable adventure written by Scott Young. It takes place on Absalom Station, and tasks the PCs with taking a visiting dignitary a tour of the space station. This scenario features the repeatable tag, meaning it can be played once per character instead of once per player. It doesn’t directly continue any ongoing storylines, although it does build off of previous events. The Scoured Stars Invasion has come to an end, and the Starfinder Society has begun to rebuild their once stellar reputation. Acts of Association does not feature starship combat. It makes use of Starfinder Flip-Mat: Urban Sprawl, Starfinder Flip-Mat: Jungle World, Starfinder Flip-Mat: Cantina, Starfinder Flip-Mat: Starship, and Starfinder Flip-Mat: Space Station. A lot, I know, but you won’t need all of them at the same time. Some of the events in this scenario are randomly determined, so you’re going to need three or four of the flip-mats depending on which events you roll. Acts of Association makes use of the Starfinder Core Rulebook, Armory, Alien Archive, and Alien Archive 2. All of the necessary stat blocks are included in this scenario, although one randomly altered stat block allows GMs to apply select race grafts onto it (if desired), which are found in Alien Archive and Alien Archive 2. These grafts are not included in the scenario and are entirely optional. This scenario features only one returning character, Chiskisk, who was previously featured in the Dead Suns Adventure Path and Starfinder Scenario #1-25: Beacon Code Dilemma. There’s no specific boons you should slot for this scenario, nor are any factions invested in this mission more than the others. However, thematically it fits well with members of the Acquisitives and Wayfinders factions.

Acts of Association begins in Absalom Station’s Lorespire Complex, base of the Starfinder Society. With the Scoured Stars Incident behind them and some prominent successes under their belt, the Starfinder Society is seeking to expand its influence back into Near Space and the Vast. To that end they’ve entered into negotiations with a variety of distant civilizations in order to acquire exploration rights in their territories.  Many ambassadors and dignitaries have made the journey to Absalom to negotiate with the Starfinder Society, and one of them needs a break. They want a tour of Absalom Station. That’s right! Chiskisk is calling on your PCs to act as tour guides. Although it may sound mundane, this is actually a pretty important. They’ll need to take the dignitary to multiple locations, ensure they are safe and entertained, all while making a good impression of the Starfinder Society. As a repeatable scenario, this adventure has some randomized elements to it. There’s a series of seven different pre-made dignitaries, as well as an eighth dignitary which is created entirely by the GM. In addition, each dignitary has randomized personality traits, values, taboos, and attractions they want to see. These attractions will determine the locations your PCs visit.

I really enjoy the pre-made dignitaries and the random personality traits. They’re all unique, memorable, and are going to be great fun to interact with. As a lot of this scenario involves social interactions, playing the scenario through with different dignitaries will make each play through unique. As an added bonus, playing through the scenario with the same dignitary can also have its own surprises, as they may not be the same person or value the same things the second time through. I enjoyed the rather mundane tourism destinations that all seem to go awry — either this poor dignitary has the worst luck or Absalom Station is the worst place to go on vacation! There’s a lot of opportunity for clever use of skill checks and combat, and how you handle each situation can affect what the dignitary thinks of you — although how it affects them depends entirely on your actions and their personality traits. Their outlook matters, and you can’t just leave all the social interactions to your most charismatic PC — which is great! The downside to all this randomness is how loosely scripted the social interactions are. The reactions of the dignitaries is entirely up to the GM to determine (based on their randomly rolled traits), which puts a lot of work into the GMs hands — particularly when you take into account how much of this scenario is social interactions. It’s definitely going to take some prep work or some great improv. Still, in the hands of a decent GM Acts of Association is going to be a lot of fun and really memorable. Another minor downside is the number of attraction options. There’s only six locations, and on each playthrough the dignitary will want to visit four of them. That means that on your second playthrough you’ll already have some overlap. That said, it’s more variable than the other repeatable scenarios out there, so I think it’s going to be a popular one. Acts of Association has some nice player handouts — dossiers on each of the dignitaries (although you’ll only get one on a playthrough). Unfortunately, one has a typo. After labelling one of the dignitaries preferred pronouns He/him he’s referred to as she/her throughout the rest of the dossier. Overall, I think it’s a really fun scenario that’s sure to create some memorable moments when run by any GM willing to embrace the roleplaying and social interactions. I give it four out of five stars. 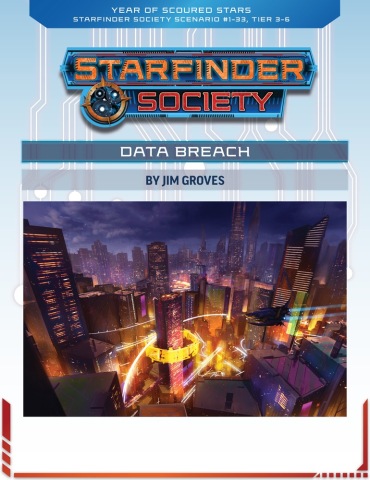 Starfinder Society Scenario #1-33: Data Breach is a Tier 3-6 adventure written by Jim Groves. It takes place on the edge of the city of Cuvacara on the planet Verces where you’re tasked with breaking into a secure facility and stealing classified data. For more information on Cuvacara you can check out Starfinder Adventure Path 11: The Penumbra Protocol (Signal of Screams 2 of 3) and for more information on Verces you can check out Starfinder Pact Worlds

or the Starfinder Core Rulebook. This scenario features the Faction (Dataphiles) tag and is of particular importance to members of that faction. This scenario does not have starship combat and utilizes a single full-page custom map.  It makes use of the Starfinder Core Rulebook, Starfinder Armory, and Starfinder Pact Worlds. It features creatures from Alien Archive, and a variant of a creature first introduced in Starfinder Adventure Path 2: Temple of the Twelve (Dead Suns 2 of 6). All of the necessary stat blocks are included in the scenario itself.

Data Breach continues an ongoing storyline that began in #1-07: The Solar Sortie and continued in #1-14: Star Sugar Heartlove!!! I highly recommend playing those two scenarios before this one, although it’s not necessary. It’s also assumed that #1-99: The Scoured Stars Invasion has taken place, although that has little effect on this scenario for players. If you have the ‘Tip of the Conspiracy’ ally boon from Star Sugar Heartlove!!! now’s the time to slot it. The events in this ongoing storyline are sure to continue on in future scenarios, including the upcoming #1-38: The Many Minds of Historia. Recurring characters in this scenario include Historia-7, leader of the Dataphiles, Hira Lanzio, a mysterious businessman first introduced in #1-14: Star Sugar Heartlove!!!, and a cameo from Venture Captain Naiaj. New characters introduced include Xatina Marcos of the Stewards, and two Dataphile technicians, Kaizel and Xarafo. It should be noted that Computer and Engineering skills are integral to this scenario, so select your characters wisely. It’s important to ensure your team has at least one tech-savvy character (preferably more than one!). If you don’t, slot one of the ‘Hireling Access’ boons. You’re gonna need it!

Data Breach begins in Absalom Station, where players are tasked with breaking into a secure facility on Verces and obtaining all the information they can from the site. Although there’s good reason for this heist, I won’t get into the details of it here, as it involves mild spoilers from some previous scenarios. Rest assured: it’s important! Before heading off on their mission the Starfinders have a chance to question a prisoner being detained by the Stewards at their base of Absalom Station, Bastion, and potentially uncover more information on the facility and its defences. From there we head right to Verces and the infiltration of the top-secret facility. Admittedly, computers and hacking aren’t my favourite parts of Starfinder. But, that said, I love a good heist. So I wasn’t sure how much I would enjoy this scenario. Turns out, I loved it! I really like the mission premise and its importance to the overarching events of this season. I like the complex itself, it’s set up, and it’s defences. I really enjoyed that many of your actions as players can have consequences in this one (including past the end of the scenario), which aren’t always immediately obvious. It was nice subtlety. Although it isn’t the major focus of the scenario, I liked the opportunity for social encounters at the beginning and end of the mission. The battles were complex and layered, particularly the final combat, which is going to be a really nice challenge. All in all, I think Data Breach is a great, guilt-free romp that I think a lot of players are going to enjoy. I give it four out of five stars. (Although, if you particularly enjoy computers, hacking, and intel-themed missions, consider it a five!) 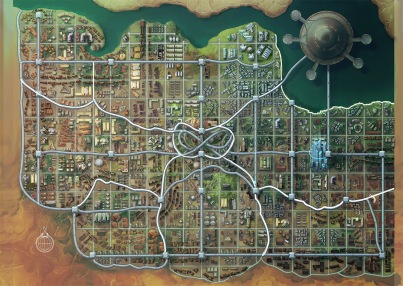 Thanks for joining us today. We’ll see you again soon when we take a look at the newest Pathfinder Society Scenarios.