Spring is in the air, April is here, and plethora of new gaming products are hitting shelves! Check out this month’s new d20 releases!

Last month was full of exciting product announcements for Dungeons and Dragons, but only one major product was released, D&D Icons of The Realms: Waterdeep: Dungeon of The Mad Mage

miniatures! Produced by WizKids these pre-painted minis come in blind boosters, each of which contains four figures — one large or huge figure and three medium or small figures. In addition to a single booster box

you can pick up a standard booster brick, which consists of eight booster boxes. Also released was a special collection of minis and set dressing, D&D Icons of The Realms: Waterdeep: Dungeon of The Mad Mage: Halasters Lab .

There are no major product releases for Dungeons and Dragons this month (as far as I know).

Minis available in D&D Icons of the Realms: Waterdeep: Dungeon of the Mad Mage. Image property of Wizards of the Coast

D&D Icons of the Realms: Waterdeep: Dungeon of the Mad Mage. Image property of Wizards of the Coast.

Halaster’s Lab. A special miniatures collection from D&D Icons of the Realms: Waterdeep: Dungeon of the Mad Mage. Image property of Wizards of the Coast. 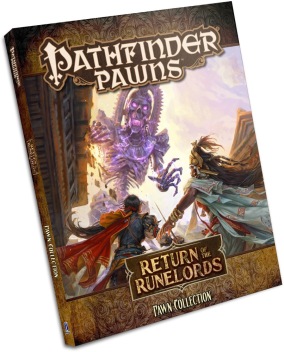 Return of the Runelords Pawn Collection

takes an in depth look at monitors — neutral outsiders — including aeons, proteons, and psychopomps. In addition to details on a variety of monitor demigods, this book also contains occult rituals, details on monitor sects, a prestige class, and a bestiary. 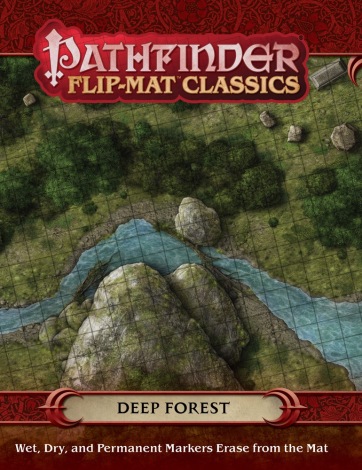 Organized Play releases include Pathfinder Society Scenario #10-18: The Daughters’ Due and Pathfinder Society Scenario #10-19: Corpses in Kalsgard. The Daughters’ Due is a Tier 5-9 scenario written by Thurston Hillman that involves the infamous Blakros family, their enemies in the Onyx Alliance, and Shadow Absalom! Corpses of Kalsgard is a Tier 5-9 scenario written by Alex Riggs that takes place in the Land of the Linnorm Kings and involves a sudden outbreak of gnomes dying from the Bleaching.

The most exciting Pathfinder release of April is Pathfinder Battles: Ruins of Lastwall! This brand new set of pre-painted miniatures comes in blind booster boxes that contain four minis each — one large figure and three small or medium figures. In addition to buying a single standard booster box you can order a brick of boosters (which contains eight boosters) or a case of boosters (four bricks for a total of 32 boosters). Anyone who orders an entire case of boosters may also order Pathfinder Battles: Ruins of Lastwall: Cemetery of the Fallen Set which is a collection of graveyard themed set dressing.

There have been a lot of wonderful renderings of this product’s miniatures released over the past month or so. Far too many to share here. Be on the lookout for further details on Pathfinder Battles: Ruins of Lastwall in a future blog post!

NOTE: According to WizKids, Pathfinder Battles: Ruins of Lastwall will be available in MAY, not April. The release date seems to have been pushed back a month. 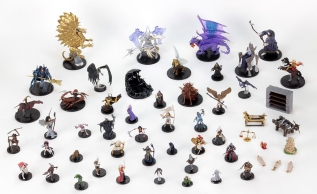 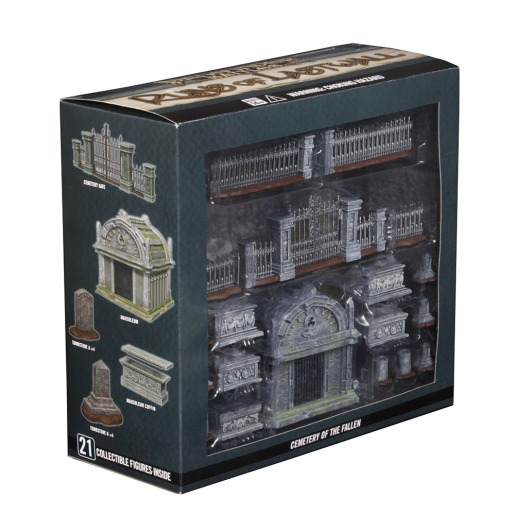 Pathfinder Battles – Ruins of Lastwall – Cemetery of the Fallen Set

Pathfinder Battles – Ruins of Lastwall – Cemetery of the Fallen Set

and the Starfinder Critical Fumble Deck! 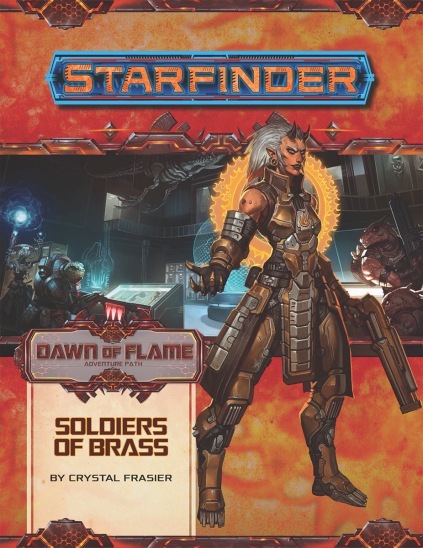 This months releases include Starfinder Adventure Path 15: Sun Divers (Dawn of Flame 3 of 6), the Signal of Screams Pawn Collection, and the highly anticipated Starfinder Beginner Box

For some of you this might be irrelevant. Others, a little scary.

I’m getting up first thing in the morning and heading over to Paizo’s website to download my free copy of everything Pathfinder Playtest. I’ll read it within a day or two, and soon be testing out the character creation process. I’ll be teaching it to my kids by the start of next week, and trying my hand at GMing an adventure for them shortly after. I’ll download the Playtest PFS scenarios as soon as they launch next week, and have reviews up on them within a day or two. When Gameday comes I’ll have a chance to try the game out as a player. Afterwards, I hope to have a chance to play again. Then there’s surveys to fill out and feedback to give, so that Paizo can make this next version of Pathfinder the best that it can be.

Everything is be available on the Pathfinder Playtest landing page, so head there first and see what there is on offer. Want it all? Click ‘Download All.’ Easy!

The first thing you’ll want to download is the Pathfinder Playtest Rulebook. This is a short version of the rules which give you all the information you need to know in order to play Pathfinder Playtest, GM it, create and level up characters. Now, as the Playtest, this is not a full Rulebook. It’s not what you’ll see when Pathfinder Second Edition launches next year. It’s a streamlined Rulebook with everything you need to know to try out the game. To try running the game. And to make a wide variety of characters. This is the major download. Read it. Enjoy it. Give it a shot. Make characters. Try new things. Share it with your family and friends. Help them make characters.

After this you should download Pathfinder Playtest Adventure: Doomsday Dawn. This adventure is actually a series of short, multi-encounter adventures which are linked over a decade of time to tell one epic story. Ancient Osirion features a wide variety of magical clocks which have been counting down through millennia. Previously a mystery, these Countdown Clocks will soon reach 0, at a time when Golarion will line up with the foul planet of Aucturn and allow the horrifying and mysterious Dominion of Black to surge across the world. Your players will travel throughout Golarion over a decade in order to understand the Countdown Clocks, defeat the Dominion of Black, and save Golarion! These mini-adventures are designed to show off and test a wide variety of game mechanics and adventure styles.

I’m thrilled for the Doomsday Dawn, particularly because I first read about the Countdown Clocks back when the The Pact Stone Pyramid

was released before Pathfinder had its own rules set. I found the clocks so intriguing I made a whole campaign around it (which was pretty awesome if I do say so myself!). Unfortunately, that was one of the games that fell apart through the years (multiple pregnancies from both a player and myself were the joyous reason that campaign never got played through to its conclusion). I’m thrilled to see what the Paizo team does with it!

Those of you who will be GMing also need to download the Pathfinder Playtest Bestiary (link not available at the time of posting) which contains all the monster rules you’ll need to run the Doomsday Dawn. You’ll likely also want to download the Pathfinder Playtest Flip-Mat Multi-Pack. This contains digital downloads of four major encounter areas in the Doomsday Dawn Adventure. These maps are said to include a burnt-out crypt, a ruined temple, a wizard’s tower, and an astronomer’s underground laboratory. I have high hopes for these maps, so I can’t wait to see them.

Those of you hoping to get your hands on a physical copy of these books can try their hand on Paizo’s website, or order them on Amazon: Pathfinder Playtest Rulebook

On August 7th Paizo releases three Pathfinder Society Scenarios for the Pathfinder Playtest (all of which are free). The first, Pathfinder Society Playtest #1: The Rose Street Revenge, is a series of four tier 1 quests that task the PCs with investigating a series of murders perpetrated by the Rose Street Killer, who has been targeting recently freed slaves. They’ll get to ally with kobolds, explore the Puddles, and… do some other exciting stuff that I’m not yet privy to! Haha. This scenario is written by Leo Glass, Thurston Hillman, Joe Pasini, and Linda Zayas-Palmer, so you know it’s going to be awesome!

Pathfinder Playtest Scenario #2: Raiders of Shrieking Peak is a tier 5 scenario written by Luis Loza. Recently, the Pathfinders discovered an Iomedean artifact that was being shipped overland from Diobel to Absalom. Unfortunately the caravan transporting it was attacked and its up to your PCs to find the thieves, and retrieve the relic. It sounds like this scenario is intended to have multiple ways to achieve your goals, which should allow both combat heavy groups, and diplomatic groups to try out different aspects of the game. The only art I’ve seen for this scenario so far features a harpy, so I’m very intrigued! (Fans of my Legacy of Fire novelization will know I’m a huge fan of harpies as potentially dangerous NPCs. Undrella was awesome!)

Pathfinder Society Playtest #3: Arclord’s Envy is a tier 5 scenario written by Liz Lydell which I am most excited for. It takes place in NEX, which is a place I’ve never had a chance to play in before, and is a mystery investigation that I know pretty much nothing about! It said to reflect the location wonderfully, and have some flexibility, which ensures that the mystery is different each time you play. This is particularly important since all of the PFS scenarios are replayable.

Well, I’m off now. I’ve got to download the Playtest materials myself, after all. Here’s hoping the website doesn’t crash…